While there there are plenty of coops and group houses in The People's Republic of Berkeley, many EBCOHO members are surprised to learn that there's just one cohousing neighborhood there so far, despite a number of attempts over the past decade. While the college town may have a progressive reputation, the highly educated, engaged citizenry has demanded levels of public participation that have resulted in challenging approval processes, and exhibited "Not In My Back Yard" (NIMBY) attitudes towards all development, even progressive communities like cohousing neighborhoods, combined with strict rent control laws designed to preserve affordable rental housing, that has made investment risky and expensive.

Berkeley Cohousing, on Sacramento Street in the West Berkeley neighborhood (zip code 94702) near Strawberry Creek, was a family farm dating back to near 1900, with a farmer's daughter's cottage added. When the Coop Supermarket (formerly Andronico's) on University Avenue was built in the 1950s, several small houses were moved to the property, and rented out. In the early 1990s, as the cohousing movement was just getting established in the U.S., three cohousing groups bid against each other for the property, and none of them got it, and the price went way up. A developer could have legally built more than 50 apartments on the less-than-an-acre urban site, but tried to get planning commission/city council approval for 75 units, and failed.

The cohousing group (an early incarnation of East Bay Cohousing, including people who had been trying to make cohousing happen in San Francisco) eventually acquired the site in 1994 (then with twelve units) and lived in it as a cooperative during a three-year self-development and condo-conversion process. One house was built on top of; another was lifted up and a unit added below. A driveway dominating the center of the site was rolled back and a parking lot created on the periphery, to make room for a central green and community garden. Two new units were built, and others were extensively renovated and resurfaced. A fence was knocked down to incorporate a neighbor participating as an associate member.

Berkeley Cohousing now consists of 15 units (14 plus one "associate member" household nextdoor) -- mainly cottages and duplexes -- scattered around a green, that also helps filter and buffer runoff from the parking lot on rooftops. 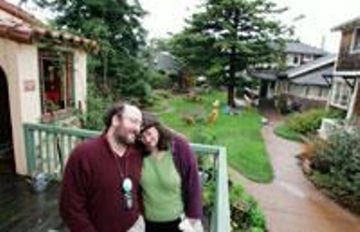 The group got a city ordinance passed exempting cohousing-type groups from having to buy replacement housing for vacant rental units they take off the market - in exchange for making the units affordable for lower-income homebuyers, in a "limited equity" arrangement that limits price appreciation to area median income growth plus capital improvements, for 30 years from each resale; buyers have to earn less than 120 or 150 percent of area median income. As a result, prices are now around 50 percent below market, and turnover is very low, running about 1 unit resold every 8-10 years; the seller can select the buyer, subject to the above restrictions.

We have a dozen children living in the community, with the largest cluster around 8-12 years old, and the youngest less than a year.

We have occasional work parties and building projects. We celebrate everyone's birthdays together. The Common House is used for many events such as movie nights, Balkan folk music concerts, housecleaner training, family get-togethers, bookkeeper training meetings, to name a few.

Community members have supported each other through a long development process, and through births, marriages, graduations, great adventures, illnesses, and death.

We would love to have neighbors who are familiar with cohousing principles and are choosing this lifestyle, are financially independent with a stable income; who value our three community meals a week and are willing to participate in cooking and cleaning rotations; who are willing to participate in our monthly general meetings and work on a committee.

Some Berkeley Cohousing members occasionally rent out spaces in their homes, or entire units. As of March, 2011, there was a rare room for rent in a home there

There's just one established cohousing neighborhood in Berkeley, along with lots of co-ops and group houses. It started in 1994 by building some new homes and revamping existing ones, adapting an existing building into a Common House. Since then it's had
http://www.ebcoho.org/berkeley_cohousing